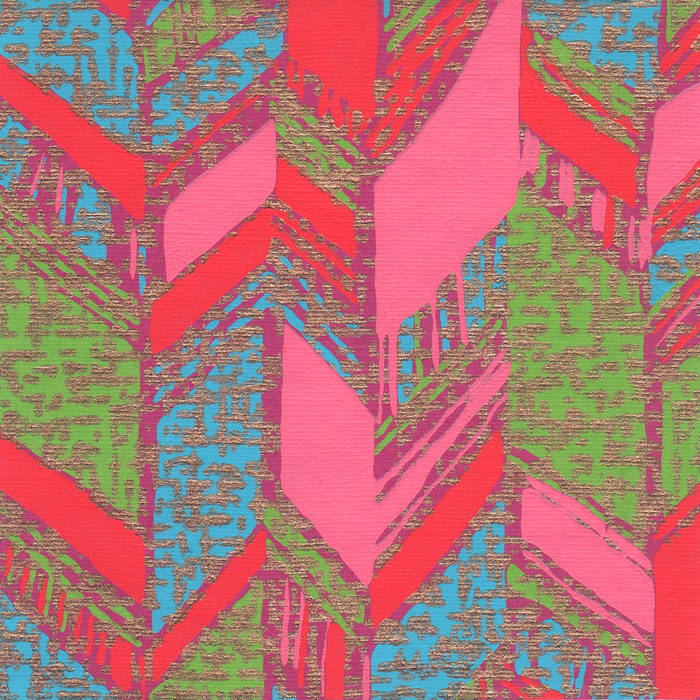 Within a year of commencing the study of Indian classical music in late 1994 with Harihar Rao, the senior disciple of Ravi Shankar, my music became reflective of the central raga principle of having one primary melodic voice and one primary percussion voice engage in variegated interplay; a concept related to the Two-Part Inventions of Johann Sebastian Bach where both voices are also valued as equals. Even when additional melodic and percussive ostinati parts are added this has been my main compositional focus, the primary voices always through-composed.

Contemplating the new compositions presented here, I wished to take temporary leave from my normal modus operandi by having melody assume more of the helm, positing music somewhat less frenetic. Thus, both Ocean Avenue and Encanto Drive feature through-composed melodic voices joined only by mesmeric percussive and melodic ostinati. Overall, the musical focus of this album is definitely more Image than Language, though the latter is essential, too.

Ocean Avenue, named for a colorful, historic street in Brooklyn, New York, and sounding something like a festive carnival, was conceived after hearing Guillaume de Machaut’s "Je Vivroie Liement”. This is the second time I have been so taken with the fourteenth century French composer’s music to the point of wishing to include it within a new piece, previously using “Douce Dame Jolie” for Lucknow Shimmer five years ago.

“Je Vivroie Liement” is essentially an A-B-A song, and while I have a clarinet presenting its melody in full, the song sections are separated within the expanse of my composition also structured in three parts. Thus, we begin with the A part of Machaut’s song played by clarinet, followed by a joyfull, seeking discourse between trumpet and piano in the manner of a duet form known as jugalbandi in Indian classical music. After a period, the clarinet returns to voice the B part of “Je Vivroie Liement”, again followed by the trumpet and piano jugalbandi. Lastly, after the clarinet plays the concluding third of Machaut’s song, trumpet and piano continue their alluring musical rendezvous towards the conclusion of Ocean Avenue.

The trumpet features an expanded lower register together with double and triple stops, the Meruvina allowing such unusual capabilities. Melodic material for the trumpet and piano, using Just Intonation, is drawn from Kafi Thaat, closely related to Machaut’s song except for the addition of a raised seventh tone, echoed in my composition. Trumpet and piano have special meaning for myself even beyond my love for their sounds because they were the first instruments I learned to play before becoming a teenager. If pressed, I would have to say that Dizzy Gillespie is my favorite trumpeter and Bill Evans my favorite pianist.

Adding to the clarinet, trumpet and piano music, a tabla ostinato phrase of 17 beats synergizes with two complex hip hop derived ostinati of 17 and 18 beats, respectively, to create a kaleidoscopic percussion mélange effervescing and cavorting over a tamboura drone.

The manner in which I’ve expanded Machaut’s “Je Vivroie Liement, presenting a musical vision sparked by the song's earthy, rollicking charm, suggests non-traditional perceptions of the passing of time, an extreme example being how Hinduism regards one day in the life of Brahma as being equal to over four billion of our years.

Perhaps the single most unique element of Indian classical music is a sense of the present moment being eternal as opposed to leading somewhere in the future. In other words, the present is so captivating there is no conscious desire to be anywhere else, and one such moment manifests imperceptibly to another. Perceiving this philosophy of musical form, amounting to a central aesthetic epiphany, first occurred during a concert of Hindustani vocal music at Washington Square Church in Greenwich Village during the late eighties, though it had been presaged to me by Morton Feldman’s “String Quartet” premiered by the Kronos Quartet at CalArts in 1980. Attraction to and awareness of this elusive quality in music (my belief is that Feldman was influenced by the Alap section of ragas) from India is likely the underlying inspiration for my compositions and Meruvina performances.

Machaut's lyrics for the first stanza of his song translated into English:

I should lead a happy life, sweet creature, if only you truly realized that you were the cause of all my concern. Lady of cheerful bearing, pleasing, bright and pure, often the woe I suffer to serve you loyally...

Encanto Drive, named for a rustic street with dramatic views high in the winding hills above Los Angeles, presents two pensively contrasting drum ostinati: one softened by brushes, alternating with another articulated by more emphatic sticks, both encompassing patterns of 15 beats. Over this subdued percussive setting enhanced by a tamboura drone emerge four diverse tone colors beginning with shahnai, followed by a bad piano, and concluding with a jugalbandi of trumpet and kane.

Placed within each of Encanto Drive's three sections is a melodic phrase played by different instruments repeated twice, the second time an octave higher. Thus, the shahnai is answered by another Indian instrument, the santoor; the bad piano is contrasted by voices singing syllables; and the trumpet and Japanese kane are paired with a Chinese erhu playing an altered version of the original phrase.

Melodic material for all the pitched tone colors originates from Raga Bhairavi, creating a feeling that may be described as both somber and devotional. Similar to Ocean Avenue, Just Intonation is favored.

What a joy it is to combine instrumental sounds from Europe, America, India, China and Japan, together with a song from 14th century France and legendary Indian ragas also going back to antiquity.

Already, refreshed from my foray into a somewhat different approach, I’m well into a new composition that includes through-composed percussion, and its fortunate to know that both approaches are possible to explore.