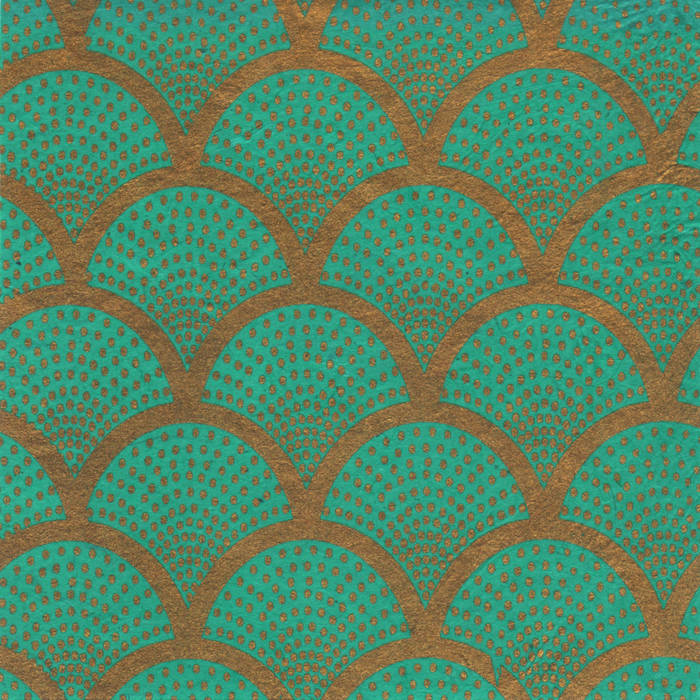 Viridian Seas presents three new 2017 compositions. They are notably linked by male voices rising gradually by octaves for drones rather than tanpuras, and with prominent use of alternating dance music percussion ostinati, a relatively recent form deeply steeped in traditional African music. Viridian Seas is based on Khamaj Thaat (Mixolydian mode), Snowy Mountain is based on Asavari Thaat (Aolian mode), and Azure Rivers features an unusual raga I may have invented (discovered), never having heard of it before.

An ascending melodic pattern intoned by disembodied voices together with Indian bells opens Viridian Seas, perhaps alluding to the Sirens luring Ulysses, launching into the composition proper with a protean piano churning and glistening port and starboard of labyrinthine percussion tacks. A rhythmic cycle of 111 matras (beats) circles like undulating waves. (The title was selected after the piece was completed, so there was no intended programmatic intent.) After considerable adventure, the disembodied voices and Indian bells reappear with a descending melodic pattern to close. Listening to Viridian Seas after the fact, I recalled the keyboards artists I have loved the most - Glenn Gould, Bill Evans, Arthur Rubenstein, Chick Corea and Ray Manzarek.

Azure Rivers is most welcome title due to the sharing of the same first word as Azure Miles Records. A kemanche alternating with trumpet and clarinet timbres presents the main melodic voice. Tabla bols form the main percussion voice, including being lower-toned compared to the bols used in Viridian Seas. Particularly noteworthy about Azure Rivers is how I invented (discovered) a new raga - one which eschews Panchama (fifth), and includes Tivra Madhyama (raised fourth), together with Shadja (tonic), Komal Gandhara (lowered third), Shuddha Madhyama (natural fourth), Komal Dhaivata (lowered sixth), Komal Nishada (lowered seventh) and Shuddha Nishada (natural seventh). My invention-discovery came about after browsing through a provocative book in Lahaina one evening last summer which produced a musical spark. Inspired, I ventured down to the grand piano in the living room and began playing the unusual scale instantaneously. (This was the same piano I used to compose the First Part of Lahaina Lanterns.) Excited by its expressive novelty, I was thrilled to actually deploy the raga for Azure Rivers some months later. After the fact, I realized that if Shadja (tonic) is moved a half-step down, the raga forms Puriya Kalyana, a raga Harihar Rao introduced to me, playing it on his sitar during a lesson. Harihar played Puriya Kalyana with much feeling, this obviously being a great favorite of his. The concluding phrases of Azure Rivers have the kemanche playfully formulating a boogie-woogie figure first played that night at the piano. A cuica appears in the opening of my composition exhibiting its charming colors by way of a playful rhythmic figure, and reemerges at the end with some musical surprises.

Snowy Mountain features a sitar timbre for the main melodic voice. Two of my teachers, Harihar Rao and Nazir Ali Jairazbhoy, were sitarists, but it was the monumental playing of Ravi Shankar that made the deepest impression upon myself, not that I have in any way attempted to emulate his playing style here. Eschewing a through-composed percussion voice, Snowy Mountain (a few months after composing and naming this work, I would unexpectedly visit the Rocky Mountains in Colorado) commences with a colorful stream of rhythmic tones from a synthesizer adopting tambura-like qualities while spinning improvisational variations on its stated theme. Throughout Snowy Mountain, the spare declarations of the sitar contrast boldly with the deep sonorities of the percussion ostinati. In conclusion, the synthesizer emerges alone once again, and the final tone of Snowy Mountain is sounded by an African wooden balafon.