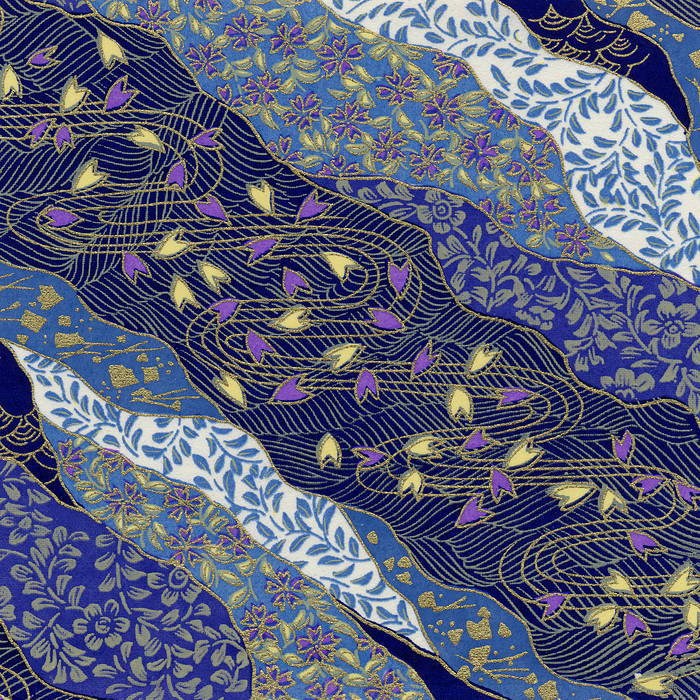 Raga Dhani reflects the gentle tenderness of morning. Even so, its charming, soothing nature has made the raga popular any time of day or night.

The seductive and hypnotic nature of Dhani’s swaras, shadja (tonic), komal gandhara (lowered third), madhyama (fourth), panchama (fifth) and komal nishada (lowered seventh), led me to conjure a piece that ended up fitting on four CDs! Bhimpalasi, from 2001, encompassed three CDs, and shares the same basic swaras of Dhani, adding shuddha rishab and shuddha dhaivata in descent. What is it about the shared swaras of Dhani and Bhimpalasi that have such a potent effect? After reflecting upon this question, I concluded that this might be the musical mode or scale that best captures the spirit of our time - the last half of the 20th century and the opening of the 21st century. The swaras found in Dhani are also the melodic skeleton of North India’s ubiquitous Kafi and Asavari thaats, the Dorian and Aoelian modes which pervade Western music, and the omnipresent "Blues Scale."

It crossed my mind that attempting such an extended composition using only five swaras was an audacious, or even reckless endeavor, but ultimately I enjoy challenging myself with new horizons.

My compositional imagination decided upon kawala for the alap, clarinet and jublag for the jor and jhalla, and three wild gats featuring two different “families” of skin percussion timbres, one “family” of wood, shaker, ratchet and metal percussion timbres, and melodic voices of trumpet, kemanche and cimbalom. Three tanpuras appear throughout the composition. (I do not tune my percussion sounds in the Indian, Indonesian or any other manner, and they vary from the sounds of the actual percussion instruments from which they are derived.)

When my instinct called for me to use extremely fast tempos for the three gats, I called my own bluff, and then rolled my eyes upon realizing the amount of programming work this would lead to after the composition was finished!

Ever since my beginnings in computer-performed music, I have been mindful not to use the medium’s super-human technical capabilities, in regard to speed of execution, for its own sake. But now, super-human speed was integral to my compositional vision, and I planned to let out all the stops.

In the alap, the lush kawala timbre, smooth as snow melting on your tongue, is periodically answered by a jegogan and jublag sweeping gently and sensually though Dhani’s swaras in a manner reminiscent of the Indian swaramandala. Here I have followed Dhani’s traditional use of different shrutis, where komal gandhara and komal nishada are pitched slightly higher in ascent than they are in descent. For the jor, jhala and gats, I limited myself to one set of ratios, finding this to sound better in the faster moving music.

For the jor and jhala, clarinet and jublag function as a jugalbandi (duet), alternating musical paragraphs. The effervescent quality of these instrumental performances is otherworldly. This is one of the miracles of electronic music: the ability to take acoustical timbres, and have these distilled tone colors performed by the relatively unexplored expressive and technical capabilities of a computer and sound module; a practice anticipated by a wide range of musical pioneers including Conlon Nancarrow, with the player piano, and Bulent Arel, using the electronic sounds of the historic RCA synthesizer. (Stravinsky was so excited about the later instrument, that he literally suffered a heart attack!). Some of the clarinet and jublag phrases are reminiscent of the charming Northern Mockingbirds I hear during late evening walks. A periodic jegogan glissando provides a pleasing textural and linguistic contrast.

A Korean gong (jing), well outside its normal range, announces the opening of the three gats with a resplendent downward flourish, balancing the upward glissandos of the alap, jor and jhala.

The first gat presents the first family of skin percussion timbres (Near Eastern, Latin American, African and Indian) with a tempo of 200 beats per minute (bpm). A trumpet timbre announces the second gat, joined by the second family of skin percussion timbres (all Indian), and the tempo increases to 240 bpm. For the concluding gat, the tempo is a scorching 352 bpm, including phrases moving at the rate of 2,816 bpm. Here kemanche and cimbalom literally alternate playing each swara of the melodic voice, together with the family of wood, shaker, ratchet and metal percussion timbres (Japanese, Chinese, Korean, Latin American and Indonesian). Tremolos played by both percussion and melodic timbres suggest the rain forest sounds of monkeys, frogs, birds and insects. The second half of the third gat features solo percussion, balancing the solo percussion that opened the first gat.

Throughout the three gats, a Brazilian berimbau articulates the various tempos with two strokes per matra (beat), contrasting the abstract rhythms of the percussion and melodic voices. The jing also appears at various intervals of the first two gats with an upward moving chant; a Buddha reflecting upon the tumult of earth. For the third gat, the jing is replaced by the “wilder” sound of an Indonesian bell. At the end of the third gat, the jing returns to close the composition by repeating its opening phrases.

The cumulative effect of the three gats is akin to looking towards the sun. It is not easy to focus on all the details for the duration of the music. I am unaware - though I suppose it must exist - of any music that maintains such extreme tempos for such extreme lengths of time. Perhaps what this music aspires to reflect is the centrifugal dispersive force known in the Hindu cosmological conception of the world as Shiva. Super-human instruments may require super-human hearing capabilities, and all of the details of this music may be impossible to perceive. However, it was my intention to explore this remote region, and I am glad that I followed through on my original design.

The pentatonic nature of Dhani, together with my use of Chinese percussion in the third gat, brings to mind the musical connections between traditional Chinese music and particular Indian ragas.

Viewing Van Gogh’s “Dr. Rey”, on loan to LACMA from Russia, I was struck by the almost unbearable intensity and beauty he expressed; something that was too powerful for him to live with.

Sometimes I find the experience of listening to my own music to be almost overwhelming, and one way I keep centered is to think of the music as something removed from the physical world.

The day after writing the preceding paragraph, I was glad to come across the following statement by Nikhil Banerjee: “I do not compromise with anybody or anything else in the world. I want to really go beyond this materialistic world. A musician must lift up the souls of the listeners, and take them towards Space.” Similarly, I interviewed Shivkumar Sharma yesterday, who stated that the way he keeps centered is by knowing that divinities are manifesting through himself: he is merely the instrument. (I also recently learned that Sanskrit is the most natural language for computer programming, and that a major Indian spiritual leader believes that divinities exist in technology.)

Sharma’s performances are enhanced by the custom kurtas he wears, along with the rings and gold chains materialized by his guru. For myself, I accompany my live performances with improvised abstract animations, and my CDs with carefully selected handmade papers from Japan, India, Nepal and Thailand.

In addition to Van Gogh, I visited a rare exhibition of paintings by Modigliani this summer. The powerful influences of Japanese (Van Gogh), African and Khmer (Modigliani) art utterly transformed their work. Likewise, North Indian classical music itself resulted from the historic synthesis of Hindu and Muslim cultures.