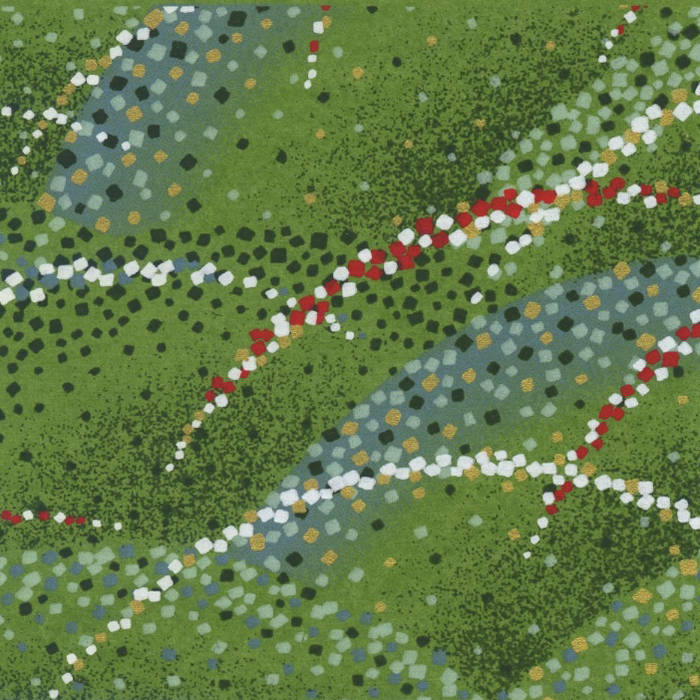 There is a particular sense of freedom in composing music without any specific timbre or instrument in mind. Part of the excitement is knowing that once the work is completed there will be a missing key to be discovered in order to reveal the most advantageous presentation of one’s invisible-physical imagination. Such was the case with Emerald Anklets, where the melody voices were conceived removed from any particular sonic hue, ultimately resulting in a previously unheard of triptych combination from the cornucopia of the world’s plucked string instruments: gayageum, ud and harp.

The Alap’s gradually unfolding and sparse nature was best colored by a gently sonorous and austere harp sound, embroidered by Indian bells, rainstick, and a tanpura drone. An opaque and playfully elusive ud timbre informs the First Gat, and for the first time in my music, the wondrous Korean gayageum, alternating between coruscating, earthy and ethereal passages, emerged as the centerpiece for the Second Gat.

Building upon my experience in the last two compositions, I used the same polymorphous drum assembled from kendang wadon, bebarongan, pelegongan and dhol bols for the third time, with notable transformations in both language and image. Repinique; a Brazilian percussion instrument, also used here for the first time in my music, joins together with bombo and dhol ostinatos to enhance the lilas and melismas of the through-composed skin-drum voice that engages the ud and gayageum.

Korean classical music remains perhaps the most mysterious and rarified tradition in my personal experience, and I am thrilled to find myself using a timbre from that profound culture as the unexpected and inevitable solution to the musical puzzle woven by Emerald Anklets. As is customary with my use of world music timbres, I am incorporating a sampled sound of an acoustic instrument within the context of voicing a composition, including going outside the ordinary pitch range of the gayageum, and not presenting it's traditional techniques and performance customs. (The same applies for my use of an ud timbre here.)

After completing this work, I noticed that Kalyani, the famous sixty-fifth melakarta of Karnatic music that Emerald Anklets is based on, translates to mean she who causes auspicious things, and uncovering two new instrumental sounds to work with, gayageum and repinique, is a most welcome occurrence. (Yaman, a raga I based a 2006 release on, is the Hindustani raga that roughly corresponds to Kalyani.) My use of Kalyani melakarta in the gats is highly abstract, entering the realm of poly-modality.

While listening to the two gats from Emerald Anklets, the sounds of a furious rainstorm enveloping a forest came to mind, with the variegated aural textures of earth, trees, plants, rocks and roofs being pelted by the frenzied droplets. This was a welcome response because fast-moving tabla music is known as rela in South Asia, a word that denotes torrents of rain. In Emerald Anklets, the crisp and swift articulations of the gayageum and ud add to the feeling of rain music. By way of illustration, here is the solo gayageum part from the opening section of the Second Gat.

Musical anklets, or feet bells, known as ghungroos, play a significant role in South Asian dance, music and theater, and are the subject of an evocative Hindi poem rendered by the legendary, and recently departed vocalist, Bhimsen Joshi, in one of my favorite recordings of Indian classical music. In this mesmerizing performance, Joshi sings of the delightful, intoxicating sound of a woman’s ghungroos as she dances in the forest. My fond experience with this recording influenced the assignation of Emerald Anklets.

During the coming year, my scores will be available for the first time, and there is a wide range of possible interpretations for most pieces. To give one example, my first realization of Emerald Anklets had the percussion ostinatos playing at a higher volume for both gats, in order to create a certain rhythmic effect, but the second and final version brought down the volume of the ostinatos, along with the volumes of the ud, gayageum and tanpura parts, for the purpose of illuminating the elusively complex melismas of the through-composed drum voice, rendering it absolutely equal in prominence to the ud and gayageum voices. It is remarkable how varied the two versions of the same composition are stemming from these fairly subtle adjustments, not to mention the minute timing alternations made in the alap for the final version. I hope that someone tries an interpretation using live musicians, even if they have to record the parts at a slower tempo, which will be necessary most of the time, and have them sped up. Dynamics and articulation are rarely indicated in my scores, but they may be extrapolated, in varying degrees, from the meruvina programming, which represents my interpretation of the score. Recently, I was reminded by an interview heard on the radio, of another composer whose scores rarely include dynamic and articulation markings, and this was not someone to quarrel with in this or any regard. (The score for Emerald Anklets contains over forty-thousand individual events, including pitched and non-pitched tones, that were programmed one at a time.)

Regarding the extra-human instrumental virtuosity found in the two gats; especially the Second Gat, I have come to appreciate something Zakir Hussain once told me: it is not a matter of how complex and technically challenging music may be for a performer-composer, but simply whether or not one has developed the ability to articulate their musical impulses and desires wherever they may lead, and balancing that intrepidness with an awareness of one’s situational limitations. A congruent concept that Morton Feldman once shared with me postulates that technique is unremarkable, and relatively easy to acquire by itself, being merely the tool one uses to express an idea, whether it is in the realm of dance, painting, or music. Stated from a different angle, an utterance by Ralph Waldo Emerson resonates especially well with my personal beliefs: “In art, the hand can never execute anything higher than the heart can inspire.”