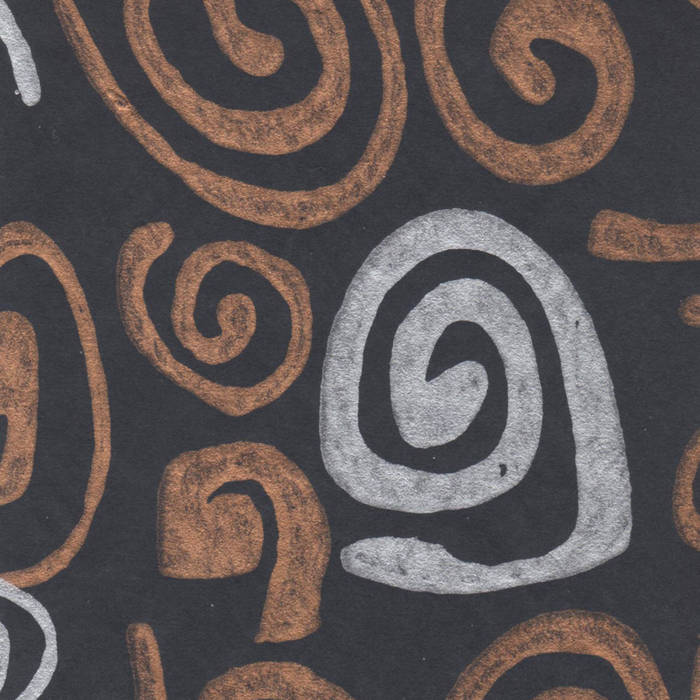 Last summer, I acquired a tape of Shivkumar Sharma and Zakir Hussain performing Kaunsi Kanada live in Pune, India. During the opening alap, Sharma and the tanpura are enveloped by a sound which I initially could not place. It was a friend who pointed out that the unusual sound was the chirping of crickets! The liner notes to the tape apologize for unavoidable "noise" on the recording, but I have grown to love this music from nature that actually enhances the performance. I listened to this recording many times during my summer hikes, but it was not until I attended a house concert by the sitarist, Reena Shrivastava, and her brother, the sarodist, Rajeeb Chakraborty, along with Shubhen Chatterjee on tabla, that I was finally moved to create my own interpretation. These gifted artists presented Kaunsi Kanada with an unforgettable tenderness. Kaunsi Kanada is a midnight raga which adds rishaba and panchama to the swaras of Malkauns. There are various opinions on the movement of the raga's swaras, and I have followed my own instincts for presenting the rasa of this exceptionally beautiful raga. For myself, the essence of Kaunsi Kanada is a deep and mystical love, along with wonderment for the mystery of the deep night.

After deciding to recreate the raga myself, I meditated on which instrument to use for the main melodic voice, deciding on ud. I had recently been greatly impressed by a rare recording in the UCLA Ethnomusicology Archive by the Armenian ud artist, Richard Hargopian, and had come to learn of various ud styles from Armenia, Turkey and Arabic countries; cultures which share a historic connection to India. In characteristic style, I have used the ud timbre in my own way, including taking it beyond its normal pitch range.

I have no interest in attempting to recreate the authentic style of any particular instrument. If that was the case, it makes more sense to have live musicians play the music. My aesthetic involves utilizing the possible expressive and technical capabilities of the digital instruments of our time to illuminate my sensations of the moment. My composing is done seated on the floor at a low table with pencil and paper. I prefer pencil to pen, even though I never go back and change a single note. Pencil allows me to erase a mistroke.

This meditational approach is similar to the ancient practice of Indian musicians performing ragas without any audience, as a form of prayer. The overall sound of my music comes after working with computer-performed sound modules for sixteen years, and it is just as difficult - some believe more difficult - to make music with this medium as it is with traditional acoustical instruments. I only mention this because once in a while I hear a common misconception that digital instruments involve only pressing a few buttons! A poetic utterance by Ralph Waldo Emerson which I carried around in my wallet for years, comes to mind:

In art, the hand can
never execute
anything higher than
the heart can inspire

Kaunsi Kanada begins very gently with alap for a single tanpura, and a caressing ud embraced by a rainstick; something I searched for to take the place of the crickets’ song. Jor begins at 15.00, and the timbre of the ud is slightly intensified, along with a haunting and subdued rhythmic ostinato in the background. At 22.29, jhala begins with a great increase in the rhythmic ostinato, and a more vigorous ud. This leads to the dramatic opening of the madhya gat at 30.01, where a large family of tabla, dholak, dhol and udu bols are introduced. The lilas of rag and tal swirl around the midnight landscape with considerable intensity, and one is astonished at the sudden commencement of the drut gat (39.04) where the tempo increases, and the ud becomes even more insistent, riding the rapids of criss-crossing currents. When the ati drut gat is introduced at 48.04, it seems as if all control has been lost, with an even more penetrating ud timbre, and a waterfall of struck skin sounds. This final section may be experienced as a musical manifestation of the Tantric piercing of the chakras, the awakening of the kundalini (serpent power) which is the energy source of all spiritual conquests. Kaunsi Kanada ends with the same two repetitions of the mysterious tanpura music which was heard at the beginning.

The musical realization of Kaunsi Kanada turned out to be a monumental task, involving the programming of over 30,000 ud swaras and percussion bols. It is a great pleasure for me to finally dedicate a recording to Ustad Zakir Hussain, one of the true musical giants of our time. No one has inspired my percussion writing more than Hussain, and his November 1999 performances in Los Angeles with L. Shankar and Vinayakram were still resonating in my memory while writing Kaunsi Kanada.

There is a long tradition in India of musicians only passing on their musical knowledge to blood relatives or those accepted into the gharana. Stories have been passed down of those who hid outside a master's window in order to listen secretly to the music which he would not be allowed to learn directly. I have experienced some of this myself including being given disinformation (!) because I am not Indian and use an original approach to the raga form, not to mention unconventional instruments. However, with all the recordings available one may still "sit secretly outside the window" and learn that way if necessary! To those who have been generous enough to pass on their musical knowledge directly, I am greatly thankful.