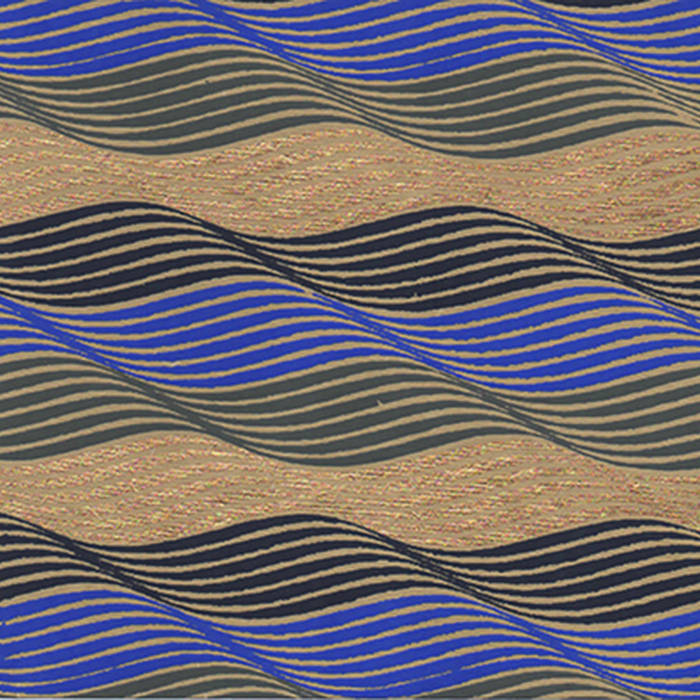 Lucknow Shimmer was set into motion by my personal discovery of Guillaume de Machaut’s music. A number of the fourteenth century French composer’s works beckoned me with captivating melodies, harmony, and expression for partial inclusion in a new composition. From this abundance of possible choices emerged Douce Dame Jolie, with a bracing melody by Machaut using virelai form.

While considering the song as a basis for composition, I recognized how its tones complied with Kafi Thaat from Hindustani music, with the exception of two accidentals, and imagined a work with three sections of equal duration drawing upon the melodic template shared by Douce Dame Jolie and Kafi Thaat. Machaut’s song would appear at the beginning of each section, intoned by a different instrument each time, followed by similarly diverse instruments playing through-composed music. Joining the melody instruments, I decided to use one lower-pitched composite skin drum for the first section, a higher-pitched composite skin drum for the second section, and a combination of both composite skin drums for the concluding third section, all playing through-composed music as well. (I do not tune my percussion sounds in the Indian manner, and they also vary from the sounds of the actual Indian percussion instruments from which they are derived.)

Together with the melody instruments and skin drums, I added two percussion ostinati born from dance music, which merge unexpectedly and seamlessly with my composed music, together with a tamboura drone.

Taking advantage of a large record shop where used CDs are sold very inexpensively, I had opportunity to listen more closely to artists like Michael Jackson, Earth, Wind and Fire, and Sade; all music that had appealed to me previously through cursory radio listening. No doubt, it was exposure to this American popular music, or European in the case of Sade, that led to the inclusion of dance music influences in my new composition, including incorporating variations of two phrases from Sade’s No Ordinary Love into each of the three sections. These brief interpellations necessitated adding Komal Dhaivata (lowered sixth) to Kafi Thaat. Additionally, I was even inspired to write an article about the music of Michael Jackson titled, “That Rhythm Dance You Into Sunlight.”

Shahnai, clarinet, and trumpet are the primary melody instruments for the three sections, preceded by kalimba, furin bell, and spokes bell intoning Douce Dame Jolie in a high register. A chorus of three cuicas echo the concluding phrases of the Machaut song each time. Lucknow Shimmer ends with a solo fourth sounding of Douce Dame Jolie voiced in alternate fashion by kalimba, furin bell, and spokes bell, again joined by cuicas in the culminating phrases.

Several key rhythmic figures appearing in Lucknow Shimmer, which I elaborate upon with myriad permutations, were originally learned from Swapan Chaudhuri during a tabla workshop I attended in Newbury Park last spring. Part of the workshop was devoted to watching a biographical documentary about the great percussion master, including his growing up in Lucknow, and that fabled city became part of my new work’s title.

Composition on Lucknow Shimmer began last June in Los Angeles, and continued in Kaimuki, an earthy, colorful section of Honolulu, whose name describes an oven where a native food similar to candy is cooked. My first week there, staying in an old stone house situated on the highest street in Kaimuki, was graced with cool breezes, and views down to the ocean were stunning at all times of day and night. When the air became still the following week, and the heat and humidity lived up to my location’s name, I still felt just as inspired to compose, carefully avoiding perspiration drops on my score. More composing followed in Kula, on the island of Maui, and Lucknow Shimmer was completed during August in Los Angeles, where it was begun.

This turned out to be one of the largest programming tasks I’ve ever attempted because Lucknow Shimmer has a single fast tempo of 152 BPM, and the composition is over forty minutes long. More specifically, there were over sixty-thousand individual events to enter one at a time in a language based upon integers.

After much time spent with programming and proofing, I entered the orchestration phase, which always presents unexpected challenges. This time was no different, including my decision to intone Douce Dame Jolie with timbres and octaves previously unimagined, in order to provide contrast for the tone colors and registers found in my composed music.

For the first time, I am making available three varied versions of the same piece, the difference coming from the nature of percussion ostinati employed. The original version has emphatic dance music derived ostinati, while alternate version 1 has the same ostinati at a considerably lower dynamic level, allowing for greater transparency, particularly in the skin drum parts. Alternate version 2 is even more translucent, making use of still softer ostanati from a skin drum and shaker.

Here, in English, are the opening lyrics for Douce Dame Jolie:

Sweet, lovely lady
for god’s sake do not think
that any has sovereignty
over my heart, but you alone.