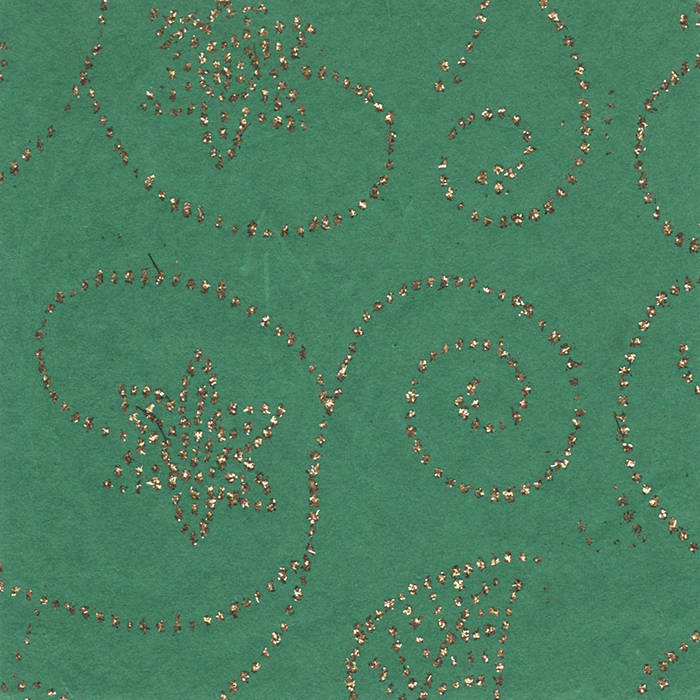 Rageshri is a warmly cheerful raga that has delighted me ever since I first heard it on a recording by Shivkumar Sharma and Zakir Hussain in 1995. In 1999, I obtained another recording of Rageshri by the same artists which is shorter, distinct and equally delightful. It is a dream come true for me to finally create my own realization.

When I interviewed Sharma in 1998, I mentioned my admiration for his recording, and how it imparted to me a strong feeling of being amidst Nature’s streams, trees, flowers, mountains and expansive meadows. (This is why I immediately selected an intense green color for the cover art, together with elegant gold tracings of leaves and flowers.) Panditji replied that Rageshri is a beautiful romantic raga, and that the feelings I experienced through his recording were a response to the sound of his santoor conveying the sensation of flowing water. Sharma grew up in Jammu, which is adjacent to Kashmir in the foothills of the Himalayas, and his music is deeply touched with a feeling for the beauty of the outdoors. The pristine perfection of his art, as pure as the melting snow from which the great rivers of India originate, is nowhere captured more beautifully than on his Moment Records recording of Rageshri. I have referred to some of Sharma’s themes in the second half of my realization.

My last four raga realizations have all featured the ud, and so I enjoyed switching to the kawala, a Near Eastern flute, for this composition. In so doing, it is impossible not be influenced by the music of Hariprasad Chaurasia, the master of the Indian bansuri. I have not been listening to his music that much in recent years, and after work on Rageshri was nearly complete, I took great pleasure in revisiting his recordings. His tone and expressive nuances are so exquisite, you are almost distracted from his raga development! I have yet to hear him perform Rageshri, but look forward to that experience with great curiosity.

Rageshri is one of a number of ragas which does not include Pa (the fifth) among its swaras. The resulting sound invariably causes one with a Western orientation to mistake Ma (the fourth) for Sa (the tonic), and this is one of the most fascinating aspects of Indian classical music for myself. Some other prominent ragas which fall under this category are Malkauns and Chandra Kauns.

The use of dynamics in my music is best described as terraced, as in Baroque music, and this composition particularly demonstrates the subtle balances between both the intensities and relative dynamic levels of kawala, percussion and tanpura. The lightness, breathiness and improvisational feeling of the music is enhanced by fine-tuning these crucial elements. My use of the kawala timbre evokes the ancient conch shell, particularly in the low register during the alap. (In India, the blowing of the conch represents no less than the primeval sound from which creation developed.) In the faster moving sections, there is an ethereal atmosphere which sometimes brings to mind the music of Lee Konitz - by way of John Coltrane’s Interstellar Space duets with Rashid Ali! Overall, there is a dreamlike quality to my composition, like a forest enveloped by low-lying clouds under a hazy full moon. Exact and sensitive setting of the dynamic level of each individual voice, also known as intensity or velocity, effects the timbral quality of the voice, and is as crucial to the life of a composition as is the choice of swaras (pitches) and rhythms. The relative dynamic levels of the voices in relation to each other is equally important.

Rageshri opens with an alap for kawala and tanpura. The jor begins at 14.08, and includes the surprising addition of a Japanese bell called the kane, which appears twice, each time sounding nine strokes. This section is followed by the jhala, commencing at 21.05. The kawala and tanpura are joined by tabla for the slow gat which begins at 28.03. I did not use any percussion on my last two CDs, and perhaps this accounts for the unusually lively activity of the tabla! The medium gat appears at 37.01, with the addition of a deeper drum, the dholak. The last section of my composition is a fast gat which enters at 45.59, expanding the family of percussion once again with dhol and ghatam. Rageshri concludes with a third surprise appearance by the kane, it’s gentle and ascending strokes radiating a feeling of pastoral optimism.